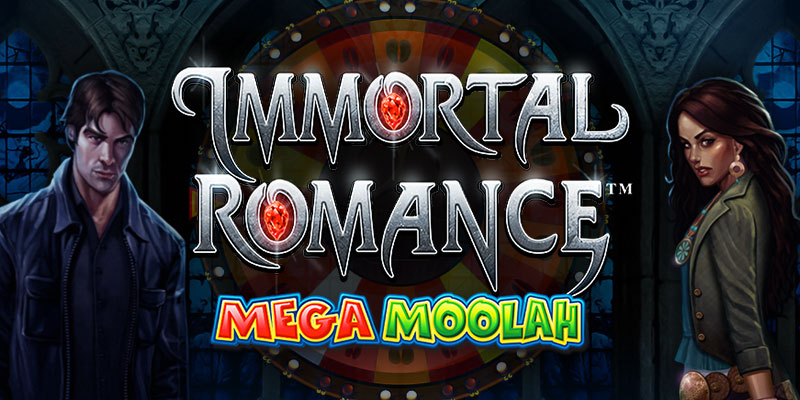 It’s been almost a decade since four vampires, Sarah, Troy, Michael and Amber graced our screens in the online casino game, Immortal Romance. Now they’re back and have brought with them a new twist to the game – that of the Mega Moolah progressive jackpot. Mega Moolah is arguably the most popular progressive jackpot online slot out there and software provider, Microgaming, has seen it fit to add the jackpot to another popular game, thereby creating Immortal Romance™ Mega Moolah. While the bonus features and symbols, as well as each character’s backstory, are exactly the same as in the original, we are excited about the progressive jackpot that’s been added. With that being said, let’s take a look at what Immortal Romance™ Mega Moolah has to offer online casino players, and why we recommend playing it at Spin Casino.

Immortal Romance™ Mega Moolah is an online slot with a 243 ways-to-win mechanic. This means that, instead of paylines, winnings are paid for adjacent symbols landing next to one another from left to right. Bet settings for the game range from a minimum of 0.30 to a maximum bet of 6 credits per spin. Immortal Romance™ Mega Moolah is a high volatility game with an average payout percentage of around 93% – 94%, however we do recommend viewing this only as a guideline. Payouts may not be as frequent, but bigger amounts can be won when a payout does occur.

All the beloved symbols are back, including the four vampires, the doorknocker Scatter, the game logo Wild and the mansion. While the Wild symbol will substitute for all other symbols (except the Scatter) to complete possible winning combinations, there is also a Wild Desire feature which can occur at random during regular play and will turn up to 5 reels Wild while awarding 1 free spin.

When 3 or more Scatters land anywhere on the reels, the Chamber of Secrets will be unlocked to reveal the Free Spins feature, starting with 10 free spins with a Multiplier of 5x from Amber. Multiple entries into the Chamber of Secrets will trigger features from the other characters as well: 15 free spins with a Vampire Bats feature from Troy, where bat symbols can turn into 2x or 3x Multipliers, and 20 free spins from Michael with a Rolling Reels™ feature, where consecutive wins can increase the Multiplier up to 5x. Last, but certainly not least, is Sarah, who will offer 25 free spins with a Wild Vine feature, where these symbols can turn into additional substitutes.

The one new feature that’s been added to Immortal Romance™ Mega Moolah online casino game is the progressive jackpot. How a progressive works is that a percentage of every bet placed on the game will be added to the jackpot amount. In the case of Mega Moolah, there are four different jackpots (Mini, Minor, Major and Mega) that could be won at random when the progressive wheel appears. Players will have one spin on the wheel when it launches for a chance to win one of these jackpots. It’s important to note that Immortal Romance™ Mega Moolah shares its jackpot with other games in the Mega Moolah group, however, the moment a jackpot has been won, it will reset to a predetermined amount.

Spin Casino was launched in 2001 and has been entertaining players from around the globe for 20 years. New players that register an account will receive a welcome bonus and will also qualify for regular promotions, including daily match offers, as well as the loyalty programme where points earned can be exchanged for bonus credits. Spin Casino has more than 500 online and mobile casino games available to play, including slots, table games, video poker and live casino games. The casino is fully licensed and regulated and makes use of the latest SSL encryption technology to ensure safe and secure deposits and withdrawals. Should you have any questions, simply contact the support team via email or live chat, 24/7.