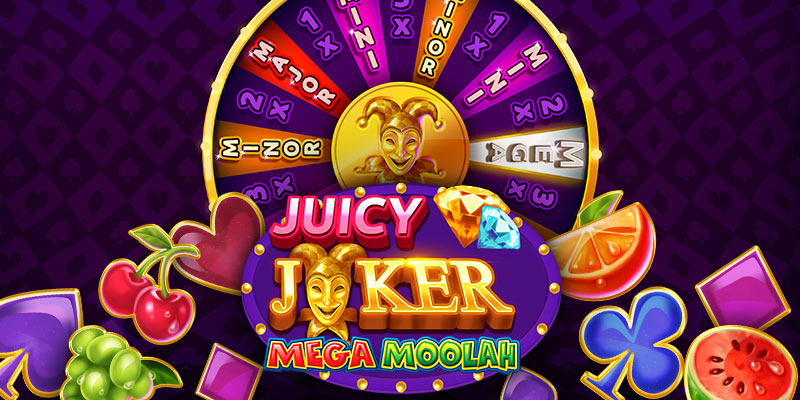 Microgaming’s Mega Moolah series is probably one of the most popular in the software provider’s extensive catalogue. The very first instalment in the Mega Moolah series, simply called Mega Moolah, was launched in 2006 and has become one of the most popular online casino games by the revered software designer. In October 2015, the Mega Moolah slot game become even more famous, thanks to its 13.2 million pound payout – the biggest payout of an online slot machine. As a result, the slot earned a place in the Guinness Book of World Records thanks to its record-breaking payout. Since then, the software creator has introduced many other Mega Moolah additions to its catalogue, including the underwater-themed Atlantean Treasures Mega Moolah. Juicy Joker Mega Moolah joins the list of payout-packed slots in the Mega Moolah series, offering pretty visuals and lucrative payout potential for players in Ireland, and the rest of the world, to look forward to.

The Juicy Joker Mega Moolah online casino game is available to play right here at Spin Casino.Microgaming has taken a different approach with the design of this online slots game – providing players with a retro-themed title that has plenty of contemporary features to offer. As a five-reel, twenty-payline slot, it delivers a playing platform that’s suited to players who are at a beginner level, as well as those who may be a little more experienced where online gaming is concerned. The game has adjustable bet sizes that start from a minimum of 0.10 credits per spin. What’s the relevance of bet sizes, you may say. The good thing about bet sizes being flexible is that you’re not pressured to play out of your comfort zone – especially if you’re someone who prefers playing with a smaller stake. Of course, many gamers who have been playing for a few years already, may prefer to place bigger stakes. The good news is that, in this event, the slot caters to those types of players too.

The reels of the Juicy Joker Mega Moolah slot are filled with a range of theme-related icons, including a club, heart, diamond, spade and a pair of cherries. There is also the watermelon icon, which also happens to be the most rewarding symbols, offering a payout of 1.5, 4 or 12 times the player’s stake for landing three, four or five in a winning combination. There are three different Wild icons that can appear in different game features. All three of these icons will replace other symbols to help complete possible winning combinations.

And now for the main event, the bonus features. The golden joker is the key jackpot icon, and when landing three of this symbol on the second, third and fourth reels, the Progressive Jackpot Wheel feature will launch. Once the feature launches, the wheel will spin and players could stand a chance to win a cash prize of between one and three times the player’s stake. The mini jackpot that starts at ten credits, the minor jackpot that starts at one hundred credits, the major that starts at ten thousand credits, and the biggest jackpot which is the mega jackpot, that starts at one million credits. There is also a Free Spins feature which is activated when the Scatter appears on the first, third and fifth reels.

The Wonder Of Microgaming

Since it first opened its virtual doors, Microgaming has been a trusted name in online game design. Established in 1994, this software provider stands tall as one of the most experience designers in the industry and was responsible for the release of the first casino games to enter the online gaming market both in Ireland and the rest of the world.

The mechanics and rules of the Juicy Joker Mega Moola online casino game cater to all player levels. This slot comes complete with an extremely informative settings page where players will be able to find all of the rules related to the game. What’s more, it is compatible with desktop and smartphone devices, giving players the freedom to experience its charm at any time or place. The unique thing about this title is that it forms part of Microgaming’s popular progressive network, that has paid out more than 1 billion since its first inception. Progressive jackpot titles are different to regular slots in that a percentage of every wager placed by players gets added to a prize pool that keeps growing until it is eventually won.

Find It At Spin Casino

Juicy Joker Mega Moolah joins a wide selection of online slot games from Microgaming that are available to players in Ireland at Spin Casino. As an experienced and respected online hub in Ireland, Spin Casino has plenty to offer when it comes to entertainment, all in an environment that ensures player safety is never compromised. This online hub also extends easy-to-understand responsible gaming tools that players can activate themselves, or by contacting the destination’s friendly and professional team of customer service experts.